The market for used Mac minis

We've been hosting and writing about Mac minis for over eight years. During that time, we have purchased and sold thousands of minis, used and new. Considering our familiarity with the product, we get emailed all the time about all things relating to Mac mini.  One of the most common emails will read something like this:

"I've been looking for a Mac mini to use as a server in our home. I don't need the newest version so I thought I'd look around for a good used one. I was surprised to find that used Mac minis aren't a lot cheaper than the new ones. Do you have any idea why?"

Then the email usually ends asking if we have any used Mac minis available. (Yes, we usually do.)

I've thought about this topic quite a bit and I do have a few thoughts on it. But first, let's look at the data. The chart below shows the depreciation of a Mac mini six months and each full year after purchase. This data comes from those thousands of Mac minis that we've sold and purchased over the years. In other words, real world info and not just guesses. 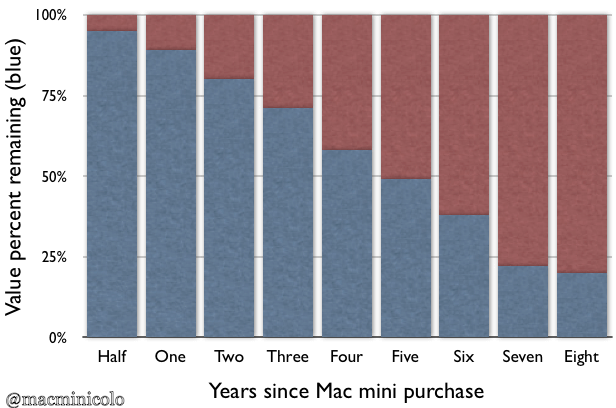 You can see that there is a pretty steady but slow depreciation over time. It's held very close to this timing. The first thing that made a noticeable effect in depreciation was the release of i5 and i7 machines. Those had great power gains.

One of the benefits of colocation is that you have the machine all to yourself. There is no risk of others using all the processing power or updating software and breaking the build. The drawback to colocation is you have to purchase the hardware yourself. I think this is where the Mac mini really shines as a colocation option. You could purchase a mid-range, quad core Mac mini for $799, use it for a year, then sell it for around $715.

Another example, you could have purchased an original G4 Mac mini for $500, used it as a server for 8 years, and sold it today for $100. We have customers doing just that. Impressive right? I can't think of another computer (even another Mac) that could retain that twenty percent of purchase price after 8 years of use.

Why the Mac mini?

So why does the Mac mini have this value retention? I've thought of a few reasons:

First, the Mac mini is small and easy to ship. This keeps the "potential buyer" market high. Personally, when I sell an old iMac I usually try to find a local friend or family member that is looking to upgrade. Sometimes I will use Craigslist. But I never list the large Macs on ebay because I just don't want to deal with shipping a big, fragile box. In comparison, a mini is easy to pack and can even fit in a USPS flat rate box that can get anywhere in the world for about $50 or less.

Another reason the Mac mini resells well is the name has never changed. It's never been officially named by the processor (G4), screen size (27in) or resolution (Retina). In other words, a Mac mini is a Mac mini. While shopping, they don't show their age by name.

A third reason the Mac mini keeps value is the jobs for the hardware transition well over time. A new mini is a very capable primary machine or Xcode server. After a few years of aging, the Mac mini remains a very good web server or kid machine. At six years old, a mini can be placed in a shelf and used as a File server or Time Machine backup location. You can tuck these machines in shelves or closets easily. In comparison, the first Core Duo iMac was being sold about six years ago. It's still a decent machine despite not running the latest operating systems.  But if you plan to relegate it to being a file server, it's not one you can just tuck into a shelf and forget it's there.  I think the size makes the older minis desirable.

Last reason might be that old machines have specific specs that people might be looking for in their use. For instance, when the minis lost their optical drives, it didn't change much for us at Macminicolo since discs are rarely used. However, it spiked the value of machines with Superdrives since many people rip their DVD and music to use the machine as a media server. We saw the same thing as dedicated graphic cards were phased out.

So there are the reasons I've seen the minis keep their value so well. And in an technology world of "treasure today, trash tomorrow" it's nice to know you can buy a machine that lasts a long time and is useful enough for others to keep a good value on resale.

If you have more thoughts on the used Mac mini market, I'd love to hear them @macminicolo on twitter.

Macminicolo, a Las Vegas colocation company, has been hosting Mac minis since their introduction in January 2005. Low cost. High performance. They are the leaders in this niche market and are known for their personal service. They currently host hundreds of Mac minis for satisfied customers located in 47 different countries around the world. Get more info on our frequently asked questions page.